A gun shop closes after 53 years, while a cutting-edge laundromat, a furniture repurposing store and an Eagle River donut shop open 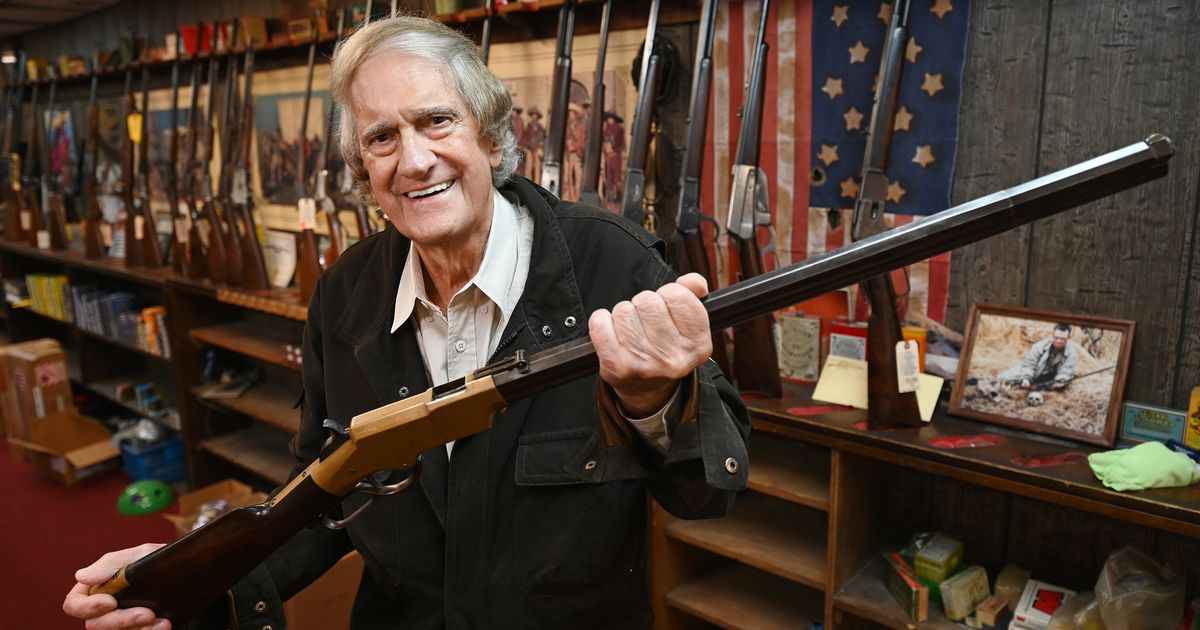 Open & Shut is an ongoing series looking at the comings and goings of businesses in Southcentral Alaska. If you know of a business opening or closing in the area, send a note to reporter Alex DeMarban at [email protected] with “Open & Shut” in the subject line.

Great Northern Guns: An Alaska landmark, this gun store in an old mobile home in Midtown Anchorage is closing after 53 years in the business.

A lot has changed for Great Northern Guns since its creation, when the Vietnam War was underway and nearby Tudor Lane was a dirt road on the edge of town.

Most importantly, Anita Dalton, the store’s always-smiling co-founder, died in February of cancer, at age 79.

Anita Dalton provided the financial acumen to keep the gun shop afloat through the decades, the men said. Andreis acquired the store’s inventory, sometimes driving up truckloads of guns from the Lower 48, when that was allowed.

The two men don’t have the energy to run the shop at 4425 Wright St., they said. They’re targeting Sept. 15 as the closing date.

Anita Dalton’s death was the primary factor in the “perfect storm” leading to the closure, Andreis said.

Consumer’s habits have shifted, they said. Andreis and Anita Dalton focused on selling antique, hunting and sporting guns. But customers are increasingly interested in assault rifles and personal defense guns, which the store also sells.

Online sales and big box stores such as Cabela’s also took a bite out business, the men said. And recently, production and supply disruptions during the COVID-19 pandemic, and strong firearm demand, made it impossible to acquire enough inventory.

“We just figured it’s the end of the day,” Andreis said.

The shop has made well over 100,000 firearms sales since its founding, Clair Dalton said.

It’s locally known for longtime employees who provided expertise on a variety of guns, Andreis said. Andreis was an expert in vintage firearms, while Anita Dalton was an expert collector of Stevens single shot and Kimber firearms.

“People would come in for the knowledge, and for the coffee and donuts,” Clair Dalton said.

The employees and customers have been like family, the men said. Customers sometimes reminisce about the time their father bought them their first .22 rifle at the store, they said.

In addition to collector’s guns and modern firearms, the store is lined with fading photos of former customers on trophy hunts. There are also photos of retired golfer Jack Nicklaus and singers Hank Williams Jr. and Ricky Skaggs, posing in the store with a thicker-haired Andreis.

Kevin McGaha, a master sergeant with the U.S. Air Force, was there on Wednesday buying himself a range bag. He’s “super sad” to hear of the closing, he said.

A friend steered him there nearly a decade ago because of its expertise and commitment to satisfying customers, he said.

One of the store’s salesmen even called him annually to wish him a happy birthday, he said.

Paying with coins was a pain, there was nothing to do but wait, and machines were loud and sometimes out of service.

So they launched Quantum Laundry Lounge at 409 W. Fireweed Lane, across the street from Reilly’s Irish Pub.

It’s high-tech. The Speed Queen machines offer touchscreen control. Payments are made from smartphones or credit cards. Shots of detergent, softener, brightener and sanitizer can automatically be injected into the wash. And an app tracks minutes remaining on all the machines, so customers can venture away for chores or time their visit.

Away from the machines, there’s a coffee bar with sandwiches and snacks. On Wednesday, some customers sat with laptops at tables, plugged into free Wi-Fi and USB ports.

“It’s the future of laundry,” said Cross, a real estate broker. Cross is part-owner with Wilcox, who started Baxter Senior Living facility in East Anchorage, and Julian Martin, who is with Automated Laundry Systems and has experience designing laundry facilities in hotels.

Other services at Quantum include commercial and residential pick-up and delivery, Wilcox said.

Quantum held a pandemic-delayed ribbon-cutting on Aug. 3, after launching in February.

On Wednesday Derrick Jabaay, who owns a lodge in Hope with several cabins, did his weekly wash with more than 200 pounds of linens and towels. His wife switched from another laundromat in Anchorage, Jabaay said.

Quantum is comfortable and fast, and the wash come out better compared to traditional laundromats, he said.

“This is a way to take a resource that would have otherwise been recycled or throw away and turn it into something else,” Moxon said. “Everything in the store is reused.”

The shop opened in late June. On Wednesday, outside her street-side store at 3545 Arctic Blvd. in the Olympic Center, Moxon painted a bench made from an old armoire door and baby crib slats.

The for-profit business provides free residential pickup of old household items. People can sign up for pickup at the company’s website.

On Thursdays, Moxon gives classes with tips for redoing old furniture or other items. One skill she teaches is chalk couture stenciling, for placing homespun messages onto old chairs, end tables or other items.

The store is open for shopping Friday and Saturday, from 11 a.m. to 6 p.m. Moxon sells items for artists who take home 70%.

“The items must have an element of reuse,” she said.

Grizzly Donuts: After the pandemic boosted remote working, a young oil company consultant from Texas moved to Alaska in January with his family, to work digitally from Eagle River.

But Ruston Lewellen, with help from his three children — ages 5 and younger — soon realized there wasn’t a donut shop in town.

“I got tired of driving to Anchorage for donuts so I said, ‘To hell with it, I’ll start my own shop,’ ” Lewellen said.

Grizzly Donuts opened on Monday. It quickly sold all its 1,000 donuts.

It’s selling out daily by mid-morning and getting good reviews on Facebook. So Lewellen and his wife, Tessa, just ordered a new fryer to triple donut production.

At this rate, the donut shop could be more profitable than his oil consulting work, which involves selling old oil field equipment for Texas companies, he said.

“We love it here,” he said of Alaska.

Play It Again Sports: In late July, the new-and-used sporting goods store closed its southside shop near the Dimond Mall after a decade.

But it immediately moved to a bigger location at Huffman Business Park at 12201 Industry Way, near the Over the Rainbow Toy Store.

Bruno said business grew during the COVID-19 pandemic, as more people got outdoors and exercised at home. It was a good snow season last winter, so that helped, too, he said.

Business is “solid,” he said.

The move also allows Play It Again to expand its rental section for winter gear. Downhill ski rentals will now be available daily, and still seasonally. Folks can grab gear as they leave Anchorage for skiing at Alyeska Resort or another mountain, he said.

“It’s one way more to bypass the line,” he said. “If you want to make it convenient.”

The other Play It Again location at 2636 Spenard Road, opened about three decades ago, was also recently expanded to offer more exercise equipment.

But its menu lives on at the same location, 11321 Old Seward Highway.

Most of the old staff, like himself, have also stuck around, he said.

Former Bradley House owner Bernadette Bradley said the closure stemmed from pandemic-related factors that reduced sales and made it hard to find workers.

Rodriguez, Gallo’s nephew, said Manhattan plans to add additional items in the future, such as a couple of high-end steak meals. He plans to also add hours when he can.

”The restaurant by itself was doing good, and you don’t want to change what is good,” he said.

The Bradley House’s faithful clientele are pleased, Cosgrave said. They can get the same drinks and the same food, such as the popular beef dip sandwich or halibut fish and chips.

The hours are the same too, he said. They’re closed only on Mondays.