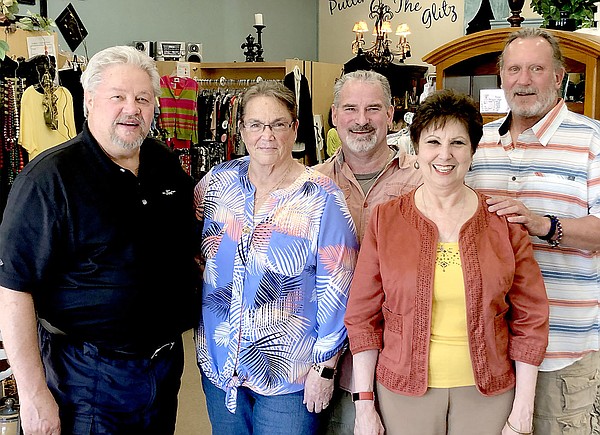 BELLA VISTA — Audrey’s Home of Hope was originally named after a tiny baby girl born to a mother who needed help from her community. The picture of baby Audrey inspired a small group of Bella Vistans to develop a nonprofit group to help other expectant mothers. Over the years, the organization has changed, and now a new incarnation of Audrey’s is rolling out.

“We wanted to help people in Bella Vista, where we live,” said the new president, Terry Sage. In the past, Audrey’s donated some of its proceeds to other organizations in the region with similar missions. Now, all the funds will stay in Bella Vista, and Audrey’s will no longer limit itself to working with expectant mothers but can help in different types of emergencies.

The resale shop on Forest Hills Boulevard opened in 2015 to fund the nonprofit group, and it has been successful. The shop accepts women’s clothes, as well as household goods and furniture. Store manager Kristy Danna knows how to price a huge variety of donations, board vice-president Jan Pruitt said. She recognizes the value of each item.

Both Sage and Pruitt are new to the board, and both started as volunteers. Pruitt started with pickups and deliveries when he realized the volunteers were mostly older women who needed help with the heavy lifting.

Sage, a transplant from Kansas City, had served on similar boards. His wife shopped at Audrey’s, and Danna recruited him.

The new board, Danna said, is made up of customers and friends of the nonprofit group. The former board members were happy to turn over the responsibility, she said, and the new board chose the new direction for the group.

People hear about Audrey’s through word of mouth, Danna said. Recently, when a house burned down in Bella Vista, a neighbor came in to ask if she could help. Even though the residents had insurance, there were needs that Danna knew Audrey’s could fill while they waited for their claim to process.

The board is developing a grant form for people in need, but for now, they depend on Danna’s judgment.

“Kristy knows everyone,” Sage said. She keeps track of the people she helps, he added. Often people are referred by a church or a neighbor, he explained.

“It’s a lot of responsibility,” Pruitt said of Danna’s work. “No one knows how important she has been.”

Danna doesn’t like to make people fill out a lot of paperwork in the middle of a crisis. Instead, she counts on referrals from churches or the fire department, or neighbors.

Eventually, the board may formalize relationships with churches and other organizations that know who needs help, Sage said.

No donations go to waste, Pruitt said. If something is donated that Audrey’s can’t use, it finds a home for it. Clothes that don’t sell are carefully boxed up and passed on to Helping Hands, he said. Other organizations may receive some of the household goods that Audrey’s can’t resell.

Some donations don’t make it into the store. They are stored in the warehouse and are passed on to people with emergency needs. For example, people starting over after a disaster may come to Audrey’s for basic furniture.

People don’t always see the need in Bella Vista, Sage said, but there are many retirees trying to live on a fixed income who can’t quite make ends meet, even with a part-time job.

The store is run mostly by volunteers. Over the years, they have become friends and often end the week with an informal get-together after the shop is closed, Pruitt said.

Recently, they manned a booth at the Farmer’s Market to recruit even more volunteers. They also sold raffle tickets with an Audrey’s shopping spree as the prize.

“There was lots of interest,” he said.

The new board is still “fine-tuning” its approach, Sage said. But the board believes there’s a need it can meet even while board members enjoy the experience of helping.

The authority on general